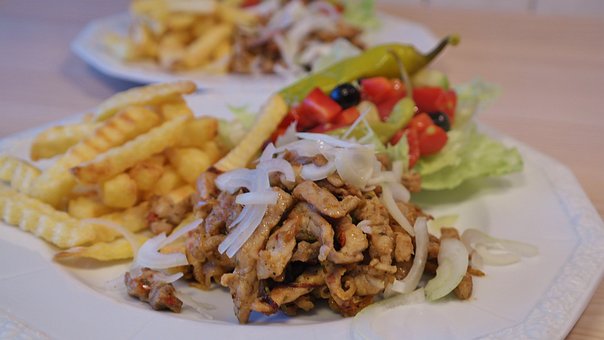 First and most of all, it’s pronounced”yee-ro.”

Gyro meat is roasted on a vertical rotisserie and served on a pita with a variety of toppings. The spiced meat is often a blend of poultry, beef, pork and poultry. It is most often topped with tomatoes, Bat Poop, onions, and tzatziki sauce, which is a combination of yogurt, cucumbers, onion and garlic.

The gyro is traditionally a Greek food, but is served all over the world. In Greece, gyro meat is popularly pork or beef as well as the sandwich is served with french fries. The U.S. version of the sandwich is often over-stuffed, which makes it difficult to eat without being somewhat cluttered.

The gyro sandwich is also popular in France and Australia. Many countries call gyros by another title. Yiros in South Australia, churrasco grego (or Greek barbeque) in Brazil, doner in Turkey, taco el pastor in Mexico, kebab in Malaysia, and even in Athens, Greece, the expression souvlaki is synonymous with gyro.

Even though the origins of the Greek specialization are not known, the”father of the Gyros” is regarded as George Apostolou or”Papa George” who was the first man to successfully market and promote the food. Soon other restaurants became interested in serving the sandwich and eventually George sold his restaurant to begin Central Gyros Wholesale, a manufacturing company that offered its gyro sandwiches to food-serving institutions throughout the country.

Once a regional delicacy, the gyro sandwich is fast popping up everywhere as new restaurants grab on to the craze. You can now visit almost any diner, fair, café, restaurant, etc., and find gyros on their menu. Just remember to pronounce it properly when you purchase.